In this report, we highlight the countries and industries that have the highest unicorn startups and valuation, and the distribution of industries that saw new addition of unicorns in 2021. We have focused on fintechs to identify the leading sub-segments and geographies both by the number of firms and valuation. We have also profiled five of the latest fintech unicorns to watch across emerging markets.

Number of unicorn companies is growing

During the year, there were 673 new additions to unicorns’ space of which 101 were fintechs valued at US$229bn. The US, UK, India and China are the leading fintech markets in terms of private equity companies with billion-dollar valuations. However, with the increased regulatory crackdown, the Chinese market has witnessed a slowdown in fresh fintech unicorns.

Fintechs have the highest weightage in the private equity space

By the end of November 2021, there were a total of 1,058 unicorns (worth above US$3.6tn) globally, which is approximately twofold as compared to 586 in 2020. Considering the industrial mix of these unicorns, fintechs come out at the top both in terms of the number of firms and valuation – the former accounts for 13% (139 unicorns) while the latter weighs 20% (US$719bn valuation). The pandemic-induced safety measures have bolstered digital adoption in the gamut of activities from hybrid working to ordering groceries; fintechs have largely capitalised on this trend. Software as a service (SaaS) is also catching up with the technology trend, with the number of firms standing at 13% (134) and valuation at 10% (US$383bn). 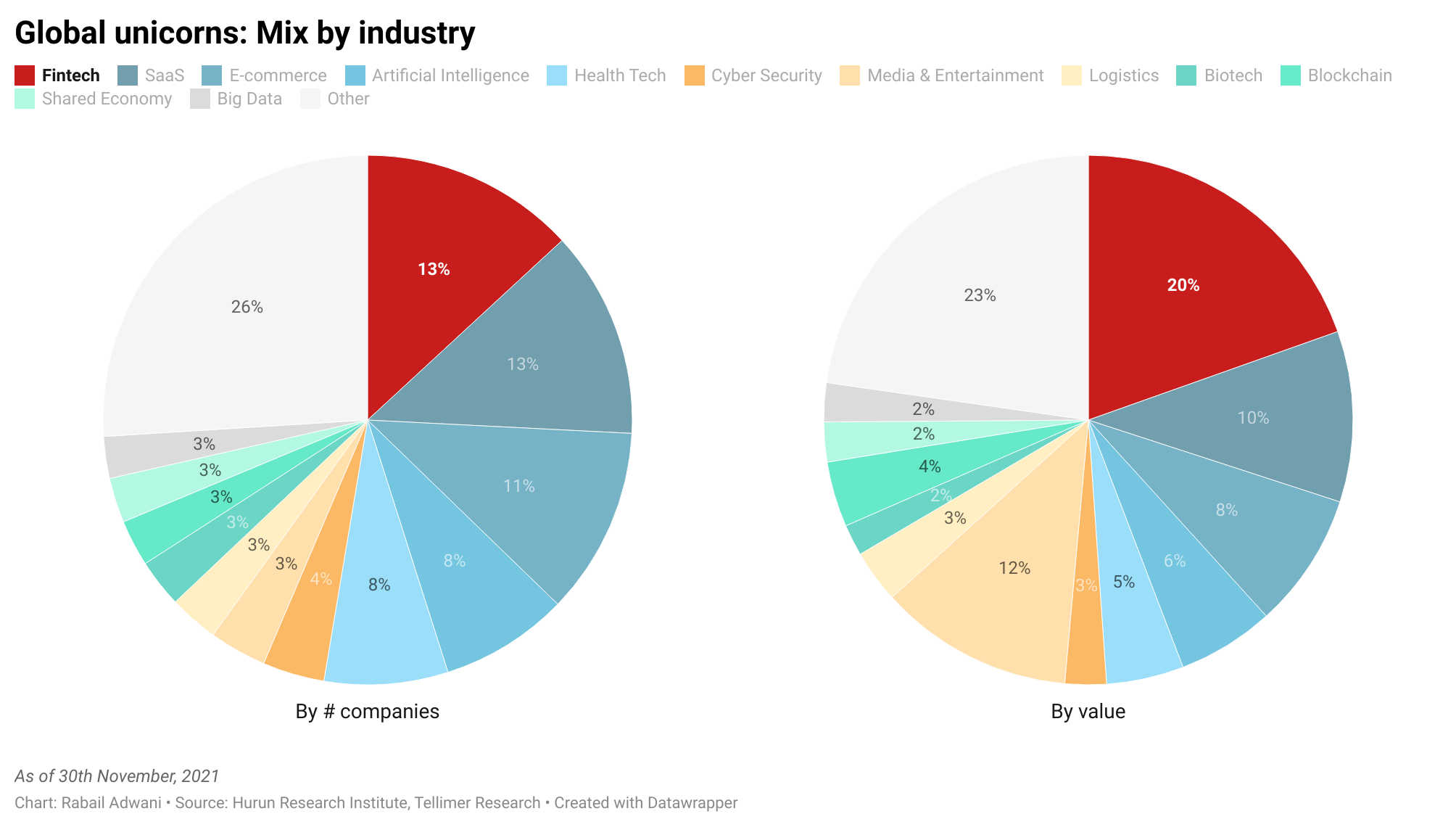 Fintech unicorns remained the most attractive among investors in 2021

Looking at the progression of private equity companies (worth above US$1bn) in 2021 from 2020 across a wide range of industries, the number of unicorns has almost doubled from 586 in 2020 to 1,058 in 2021 generating additional value of approximately US$1.5tn. There were 673 additional unicorn startups in 2021, while 201 firms departed from the unicorn club including fintech giants that went public such as Lufax, Paytm, Nubank, and Robinhood.

Fintechs have witnessed the highest increase of 101 firms, which account for 15% of the total newly emerged unicorns, and these companies are worth US$229bn (16% of the additional valuation). SaaS is the second largest growing industry in both number and valuation of unicorns – capturing 14% (92) and 13% (US$184bn), respectively. Looking at the dispersion of newly emerged and total number of unicorns, the industries gaining marginal interest include fintech, SaaS, health tech, and cybersecurity. As per our fintech survey, cybersecurity is one of the important values that consumers demand from fintechs. 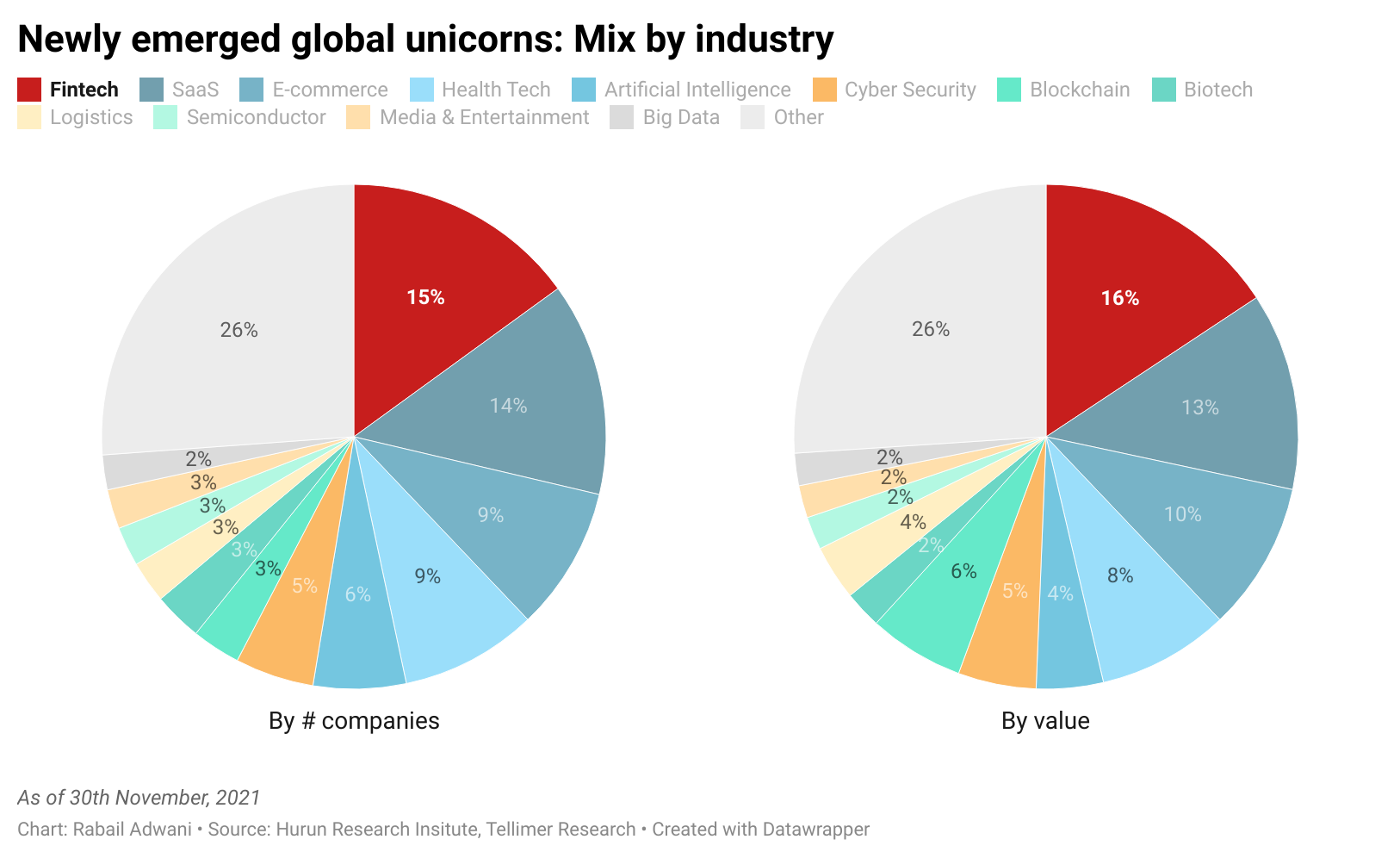 US, UK, India and China have the most fintech unicorns

There are a total of 139 fintech unicorns with an aggregate valuation of US$719bn. The US is leading with 61 fintech unicorns and US$281bn, taking over a third of the slice in the number of firms as well as in valuation. There are merely 10 fintech unicorns in China that contribute an immense US$198bn valuation (28% of the total), augmented by Ant Group. Other emerging markets worth watching include India, Indonesia and Brazil.

Ant Group is the top most-valued fintech in the private equity space with a whopping valuation of US$150bn. Stripe, the US’ dominant fintech, ranks second after Ant Group with a US$95bn valuation. 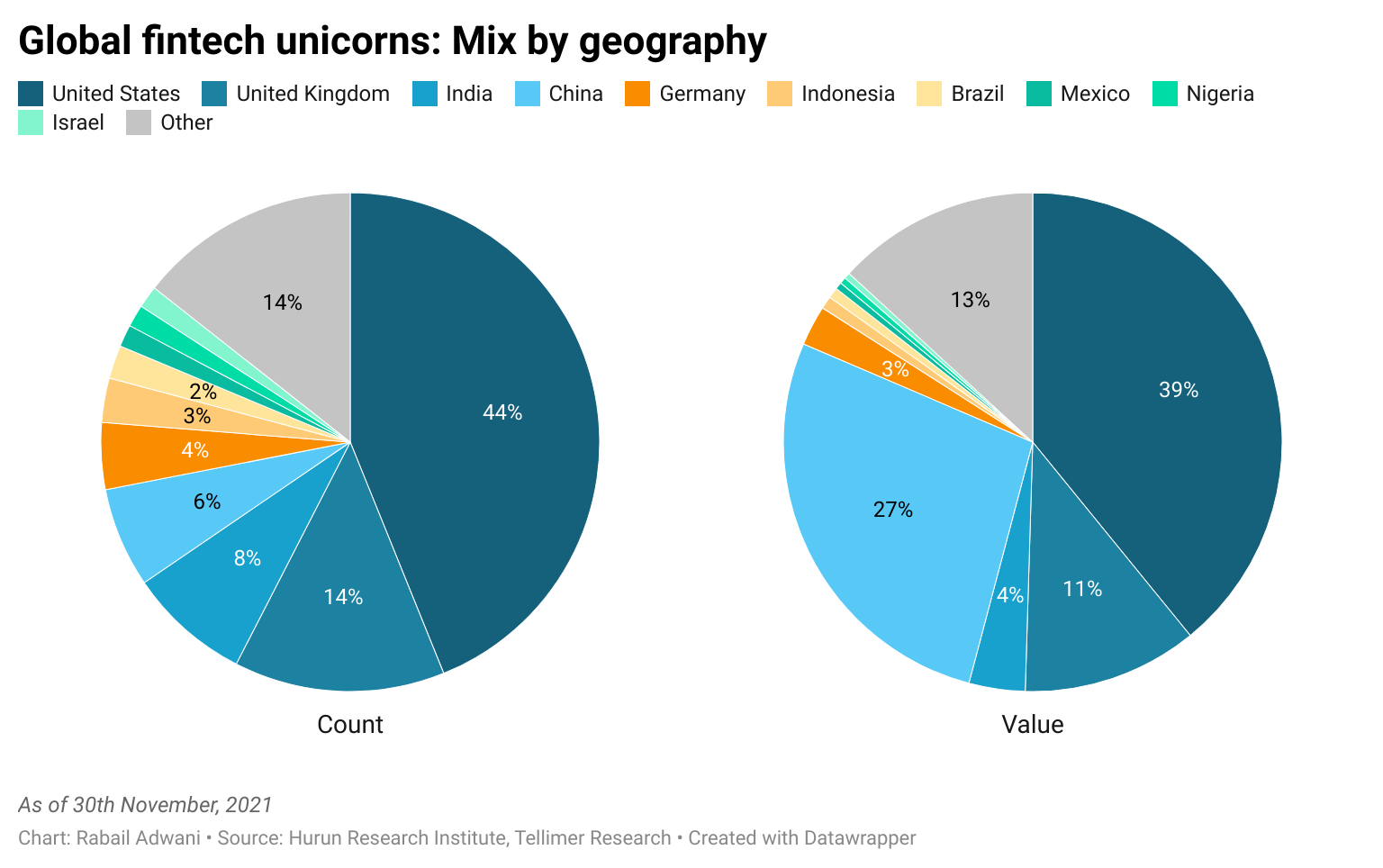 Over the year, 101 new fintech unicorns emerged globally generating an additional wealth of US$229bn; half of these were from the US accounting for 50% (50) in terms of number of firms and 54% (US$125bn) in value. The UK, India and Germany also had a high number of additions. While Chinese fintechs appear to be a victim of the government’s regulatory crackdown, the Indian fintech market is gaining traction with the number of unicorns growing by ten over the year, generating an additional valuation of US$22bn. Other emerging markets that saw new additions include Brazil, Mexico, Israel and Indonesia. 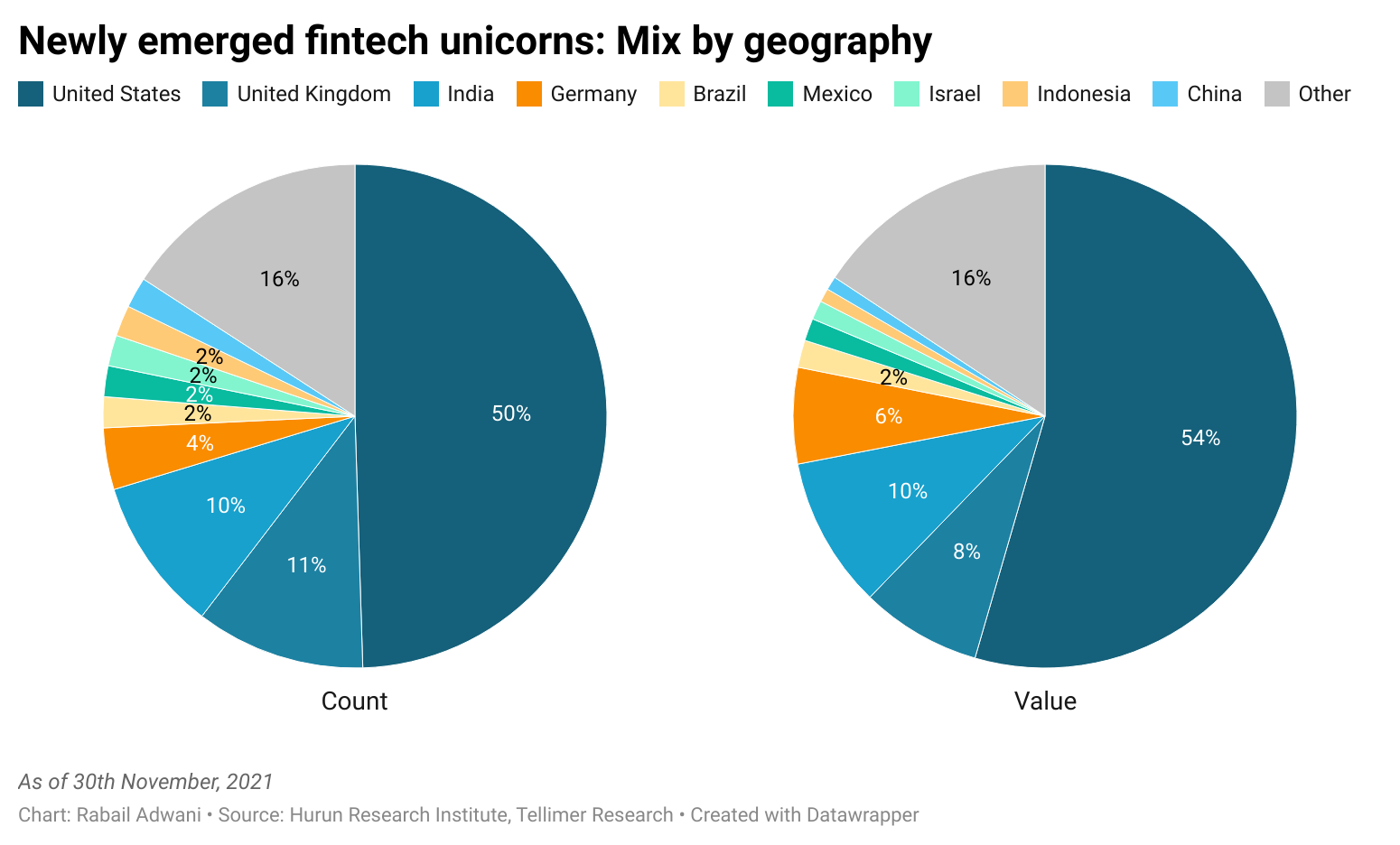 Within the fintech landscape, out of 139 unicorn firms (valued at US$719bn), payment firms make up more than half of the valuation (60%, US$429bn), helped by highly valued companies such as Ant Group, Stripe, Klarna and Revolut. Digital banking ranks second with 17% (24) of the number of firms and 15% (US$109bn) in valuation – the firms in this sector are concentrated in developed markets. 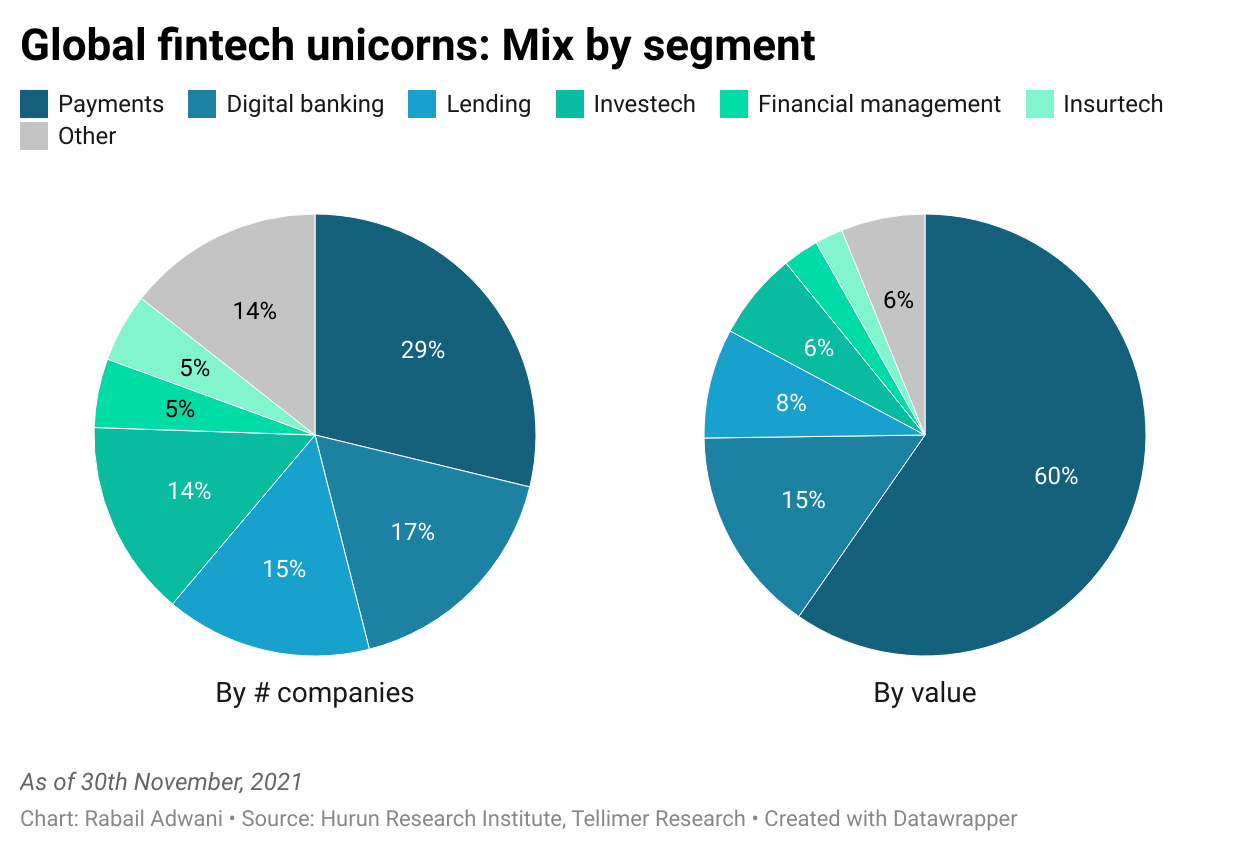 Analysing the segment dispersion of the 101 newly emerged fintech unicorns in 2021, which generated a total additional valuation of US$229bn, almost half of the incremental valuation came from two segments ie payments (26%; US$59bn) and lending (22%; US$50bn). Digital banking ranks fourth in terms of the number of firms, but its valuation exceeds investechs.

A key point to note here is that although payment firms have attracted the highest value till date, the situation is changing now; new unicorns are emerging from different sub-sectors such as lending, blockchain, investech and insurtech. Insurtech firms had a minute share in the private equity pie albeit investors are assigning them higher value now. 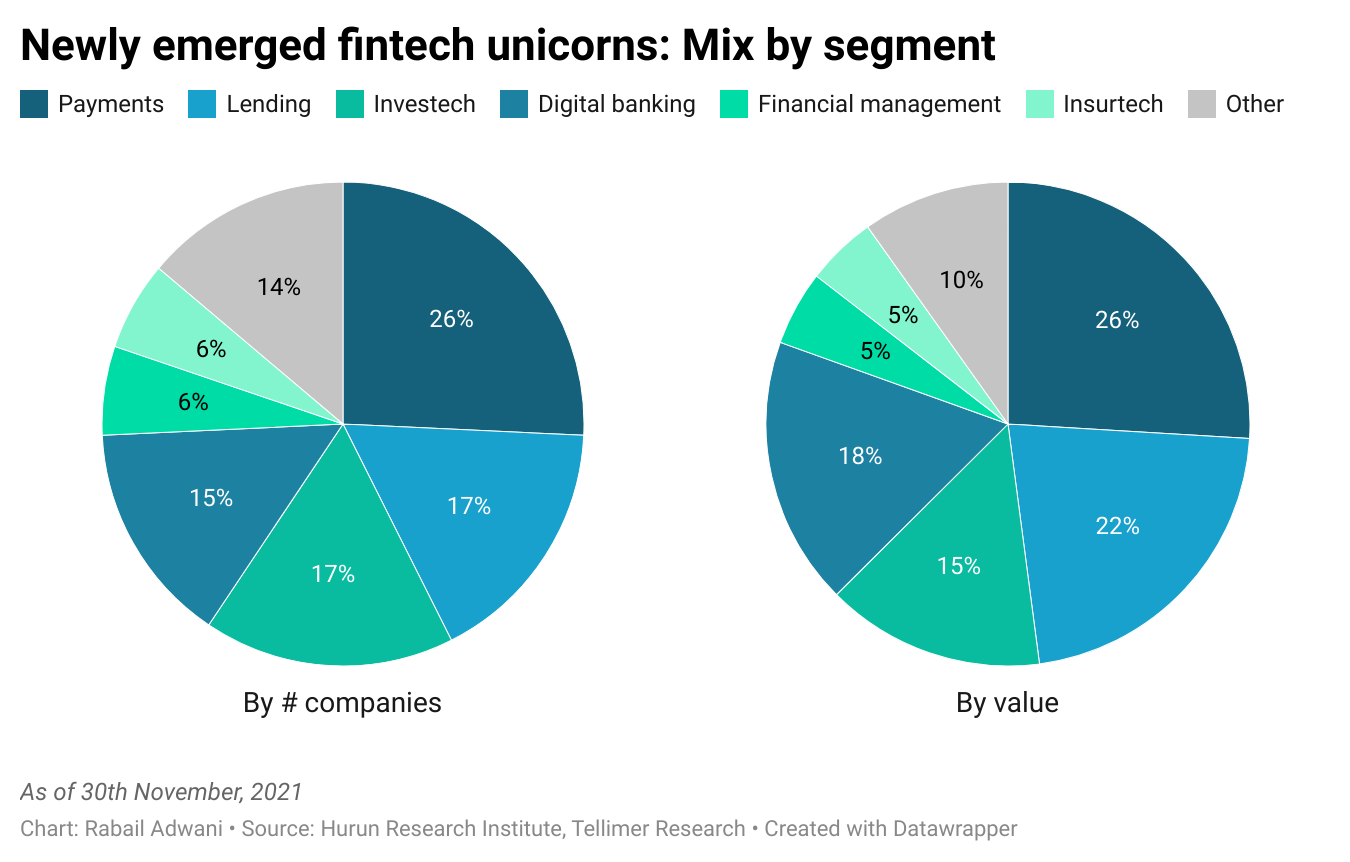 From a wide array of newly emerged fintech unicorns across EM, we highlight these following names worth watching;

Digit Insurance provides insurance solutions including car, travel, health and jewellery insurance services in India. It allows consumers to make comparisons and track the most suitable policies, enabling them to make informed decisions. Founded in 2017, Digit Insurance transforms the traditional insurance business model by eliminating the knowledge barrier, long claim settlement, and cumbersome processes involving lots of paperwork. It provides a completely paperless experience via a mobile application where customers can buy/renew policies, apply for claims, and check premiums instantly with 24/7 customer care support. Digit Insurance attained unicorn status at the beginning of this year with a US$1.9bn valuation, further increased to US$3.5bn after a funding of US$200mn in July 2021.

Uala offers a prepaid Mastercard and a mobile application providing a range of financial services including bill payment, investment products, BNPL, insurance etc. In addition, it offers mobile point-of-sales (mPOS) solution for entrepreneurs and merchants. In August 2021, the startup claimed to have issued over 3.5mn cards in Argentina and Mexico. Also, it raised a Series D funding of US$350mn, raising its valuation to US$2.5bn.

Mynt is a Philippines-based fintech startup providing a range of services including payments, remittance, loans, business solutions and platforms. Founded in 2015, it is a partnership between Globe Telecom, the Ayala Corporation and Ant Group. In addition, the company operates two fintech companies – GCash, a mobile payment application, and Fuse, a microloan service provider. In November 2021, Mynt raised US$300mn in funding, valuing the firm at US$2bn and making it the lone fintech unicorn of the Philippines. In addition, at the time of the fundraising, the company claimed to have 48mn users with daily app log-ins and daily active transactions of 19mn and 12mn, respectively.

OPay is a platform that allows users to send and receive money, pay utility bills, save and borrow money; it enables its customers to access smart financial services in a one-stop application. The company is based in Africa’s most populous country, Nigeria, with a secondary office in Egypt, which also has a sizeable unbanked/underbanked population. As of August 2021, the company’s monthly transactions volume exceeded US$3bn (up from US$2bn in December 2020). In addition, the firm has a network of over 300,000 agents and 8mn active users. In August 2021, the company raised US$400mn Series C funding led by Softbank, taking its valuation to US$2bn and adding OPay to Africa’s small list of unicorns.

Konfio provides credit solutions, both credit card and lending, to businesses by leveraging the proprietary algorithm that combines data and technology to measure credit worthiness. In addition, it has two more products which include KonfioPay and Gestionix. The former is a B2B payments management solution while the latter provides cloud-based system for operational, accounting and financial management for businesses. In September 2021, the company raised an additional US$110mn in Series E round extension raising its valuation to US$1.3bn.

Insurtech is Finding Its Footing: Where You Could Focus Your Investments

What It Takes for Advisors to Win With Marketing Today